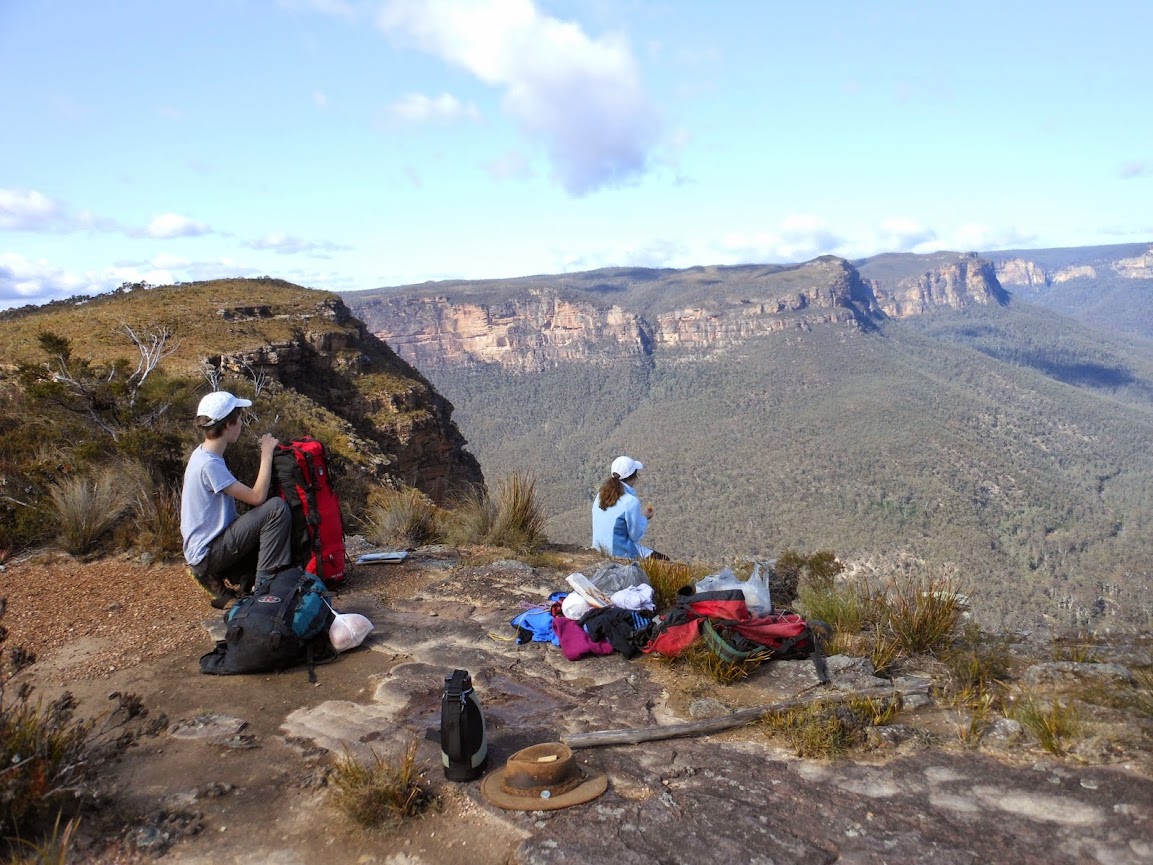 We went on an overnight walk down to the Grose Valley. Started at Mt Banks car park, walked the circuitous, but relatively flat 5km along the fire trail around the East Side to the lookout over the Grose.

After a short unintended detour to Frank Hurley Head, we returned to the inconspicuous fire trail extension road.  And came across what looked like 50,000 year old grinding grooves. 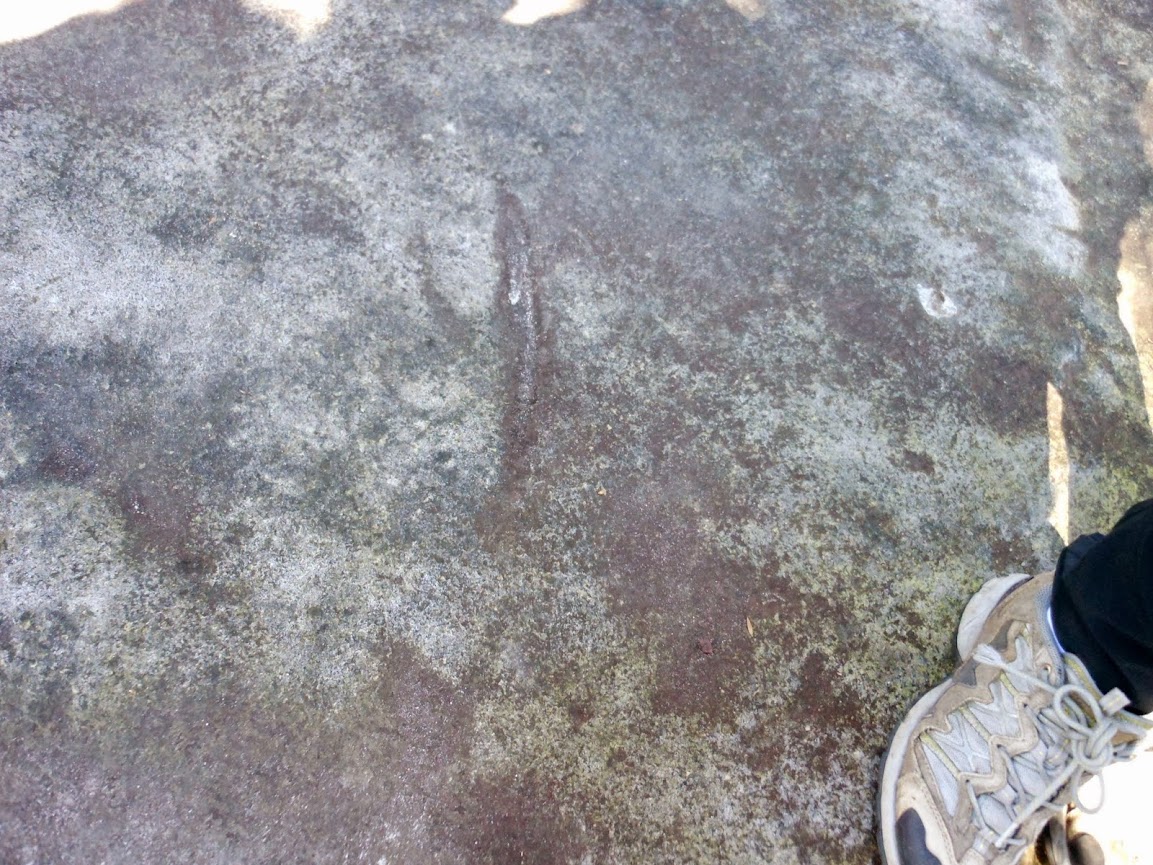 After a further 5km we arrived at the end of the fire trail at a small knoll - a quick early lunch and 5 minute walk down to the head of Zobels Gully, where we paused at a prominent rock for an obligatory photo opportunity.

In the background is Mount Caley - we will return from that direction tomorrow. 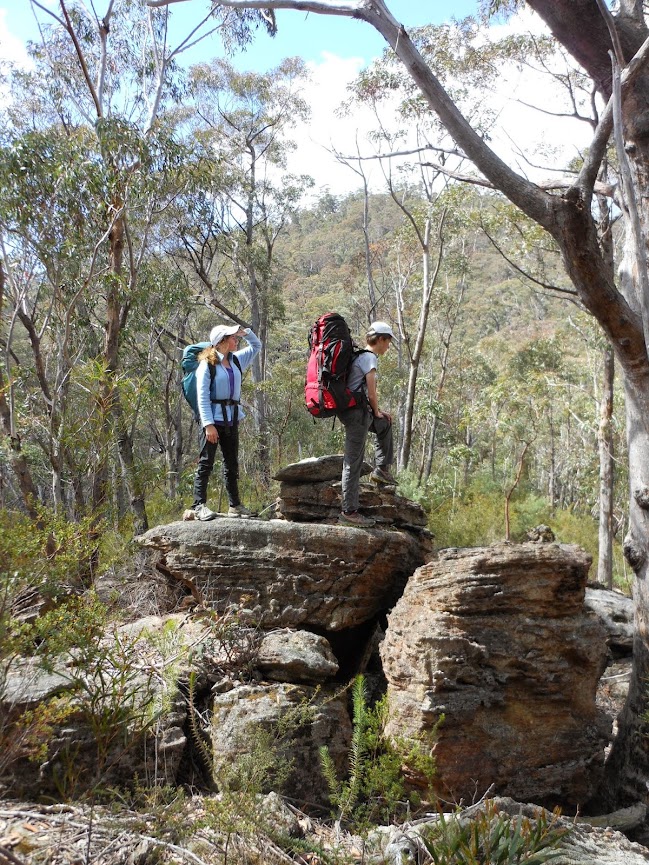 Zobels Gully was thick with scrub and the going was slow. We came to an impassable drop & tracked around to the East, tried a two or three climb downs only the greeted with more precipitousness. 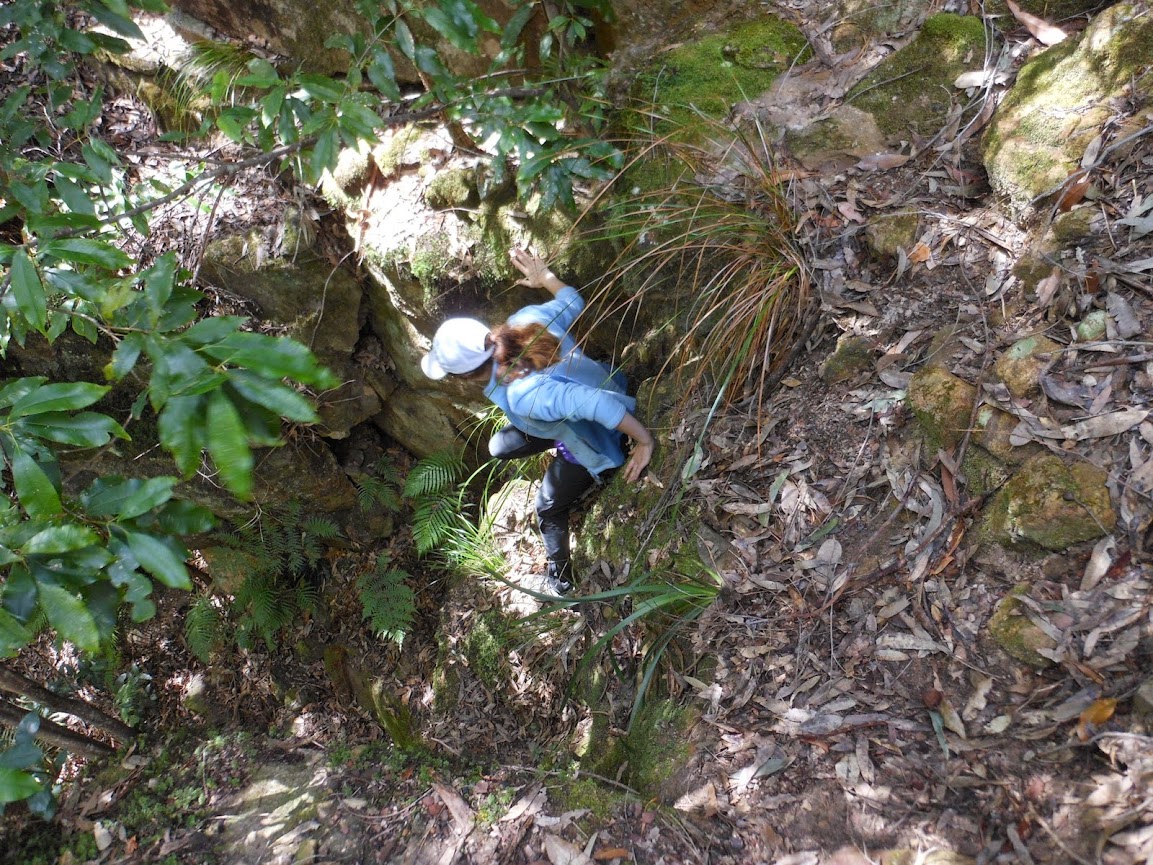 3rd failed attempt to get into Zobels Gully

Eventually, around 100-150m from the valley wall we found the way down a ramp on the East side of the gully.

If you were ascending the gully it would be a lot easier to find the exit ramp - look for the knobbly tree in the centre of the gully,turn right & there’s an obvious cairn, and follow the easy ramp up to the East. 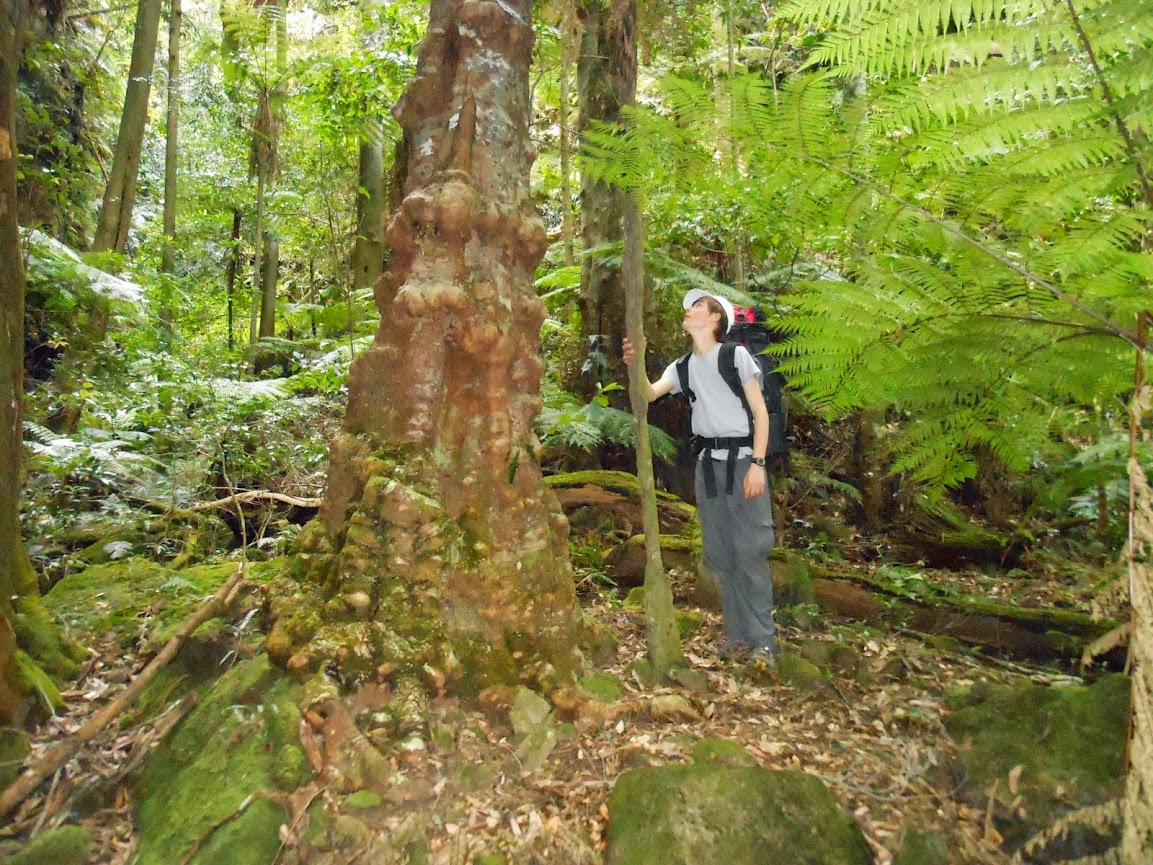 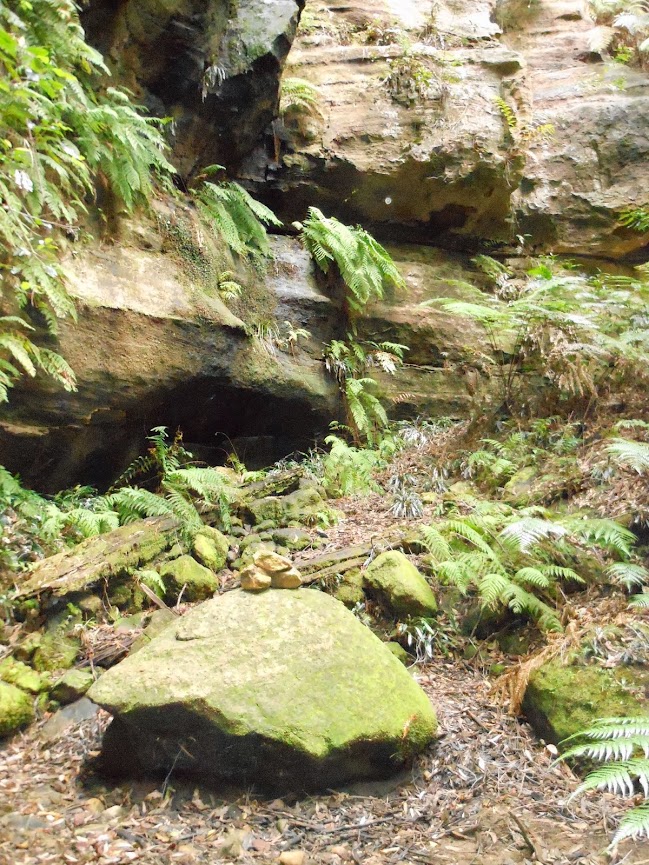 The topo showing the whole route from the car park along the 10km fire trail to Zobels, down to the Grose, the perched lake and back up Garrads Gulch, and finally the epic over Mt Strzlecki & Mt Caley.

Our camp site was where we crossed the river close to the perched lake. 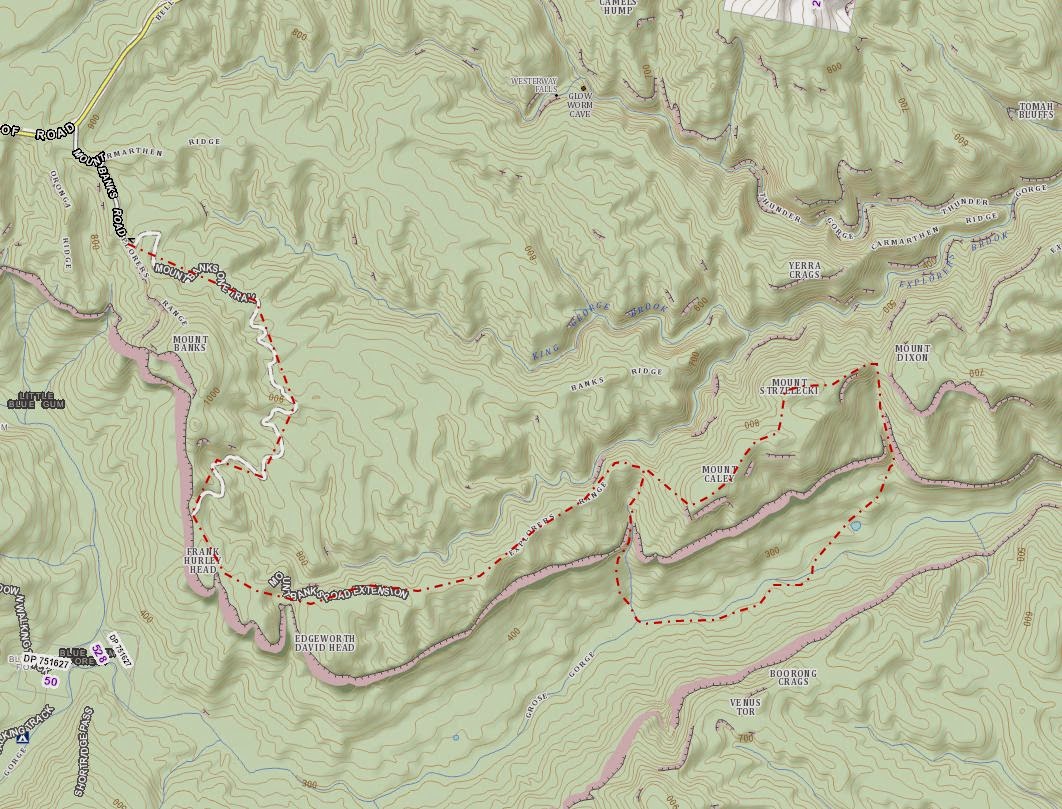 After exiting the gully to the West avoiding the final drop we descended steeply through more dense scrub to eventually arrive at the Grose River.  It took an hour to walk the 1.5km downstream (there was an occasional faint track on the South bank) to eventually find a sandbank with a small space to pitch a tent.

The campsite was close to perfect - glassy pool, plenty of firewood & kindling, gently tumbling rapids, level ground for tents, bit of canopy for shade, and best of all neither sound nor sight of any other human. 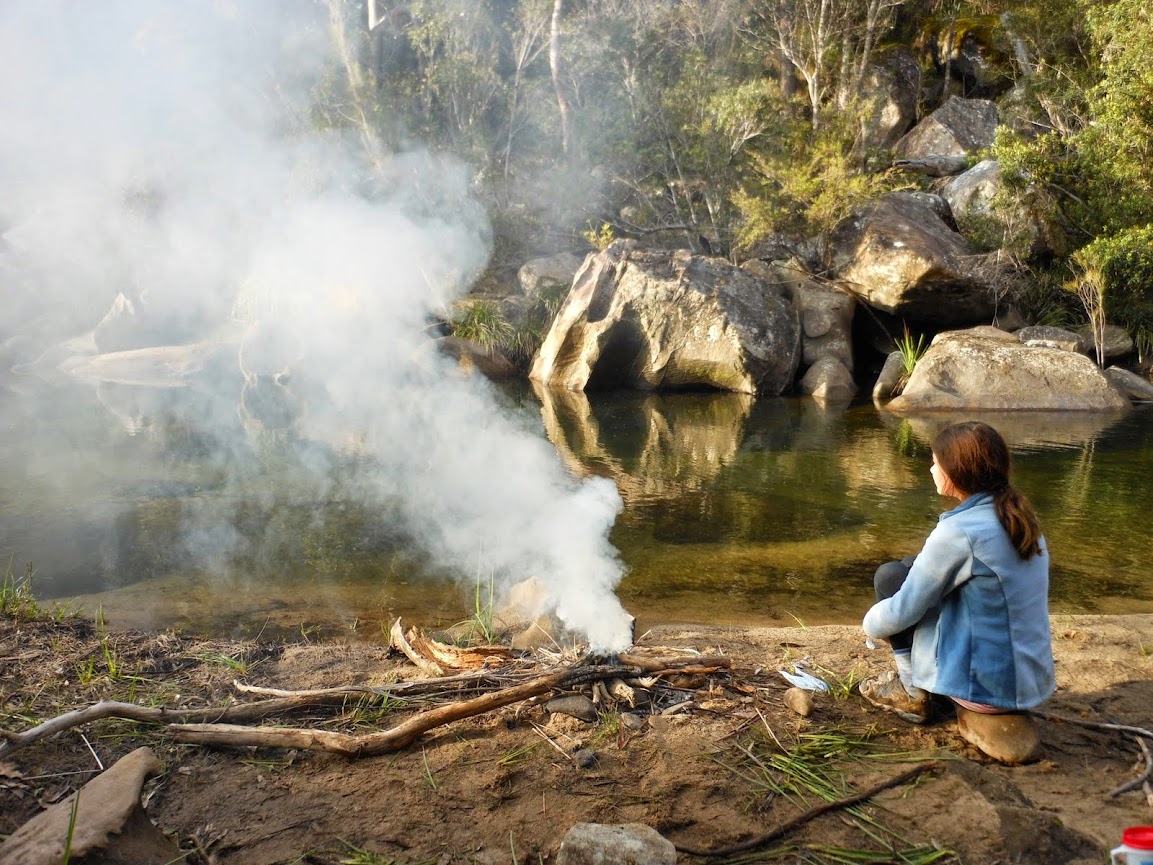 A billy of tea, and pasta & chicken stew, followed by bed - we had no torches & were tired from 2 and half hours of fire trail walking, and 7 hours of bush bashing. 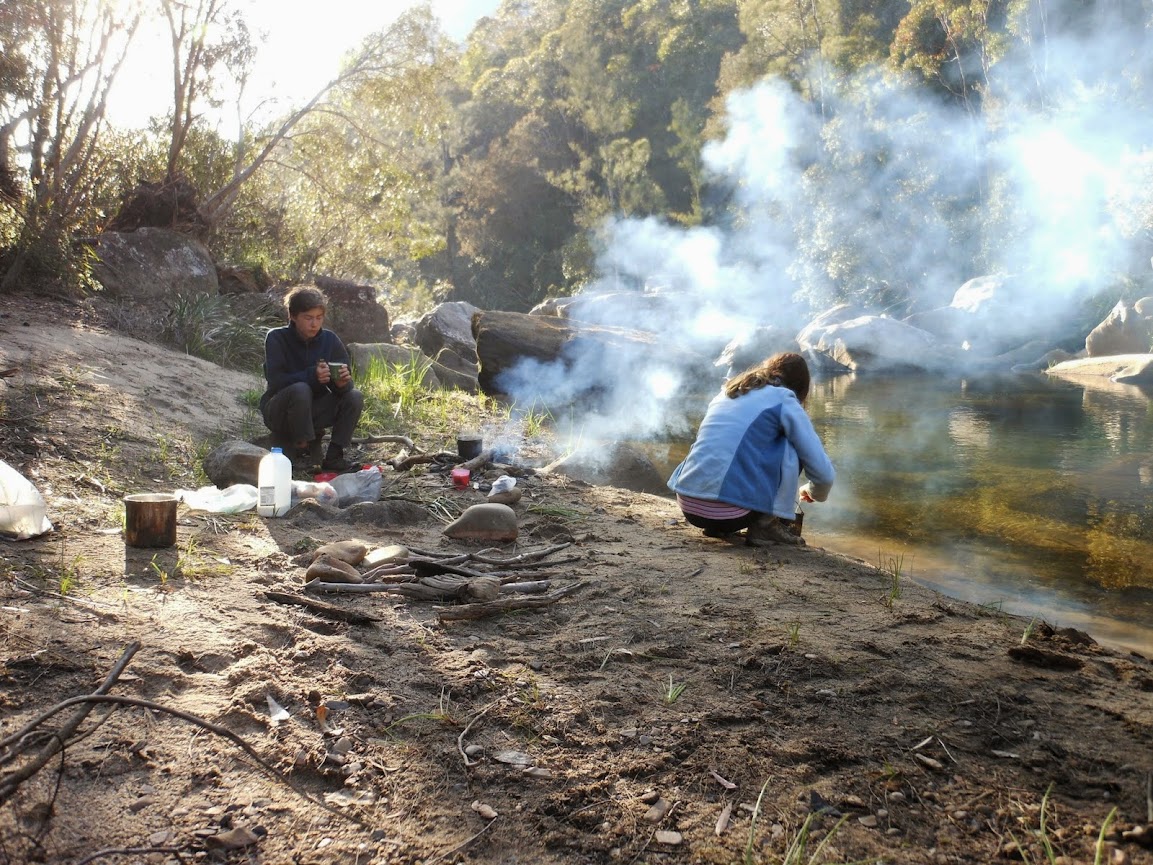 Next morning we broke camp at 8am, and took a side trip to the perched lake on the North side of the valley. And then headed diagonally up towards Garrads Gulch… through more thick scrub. 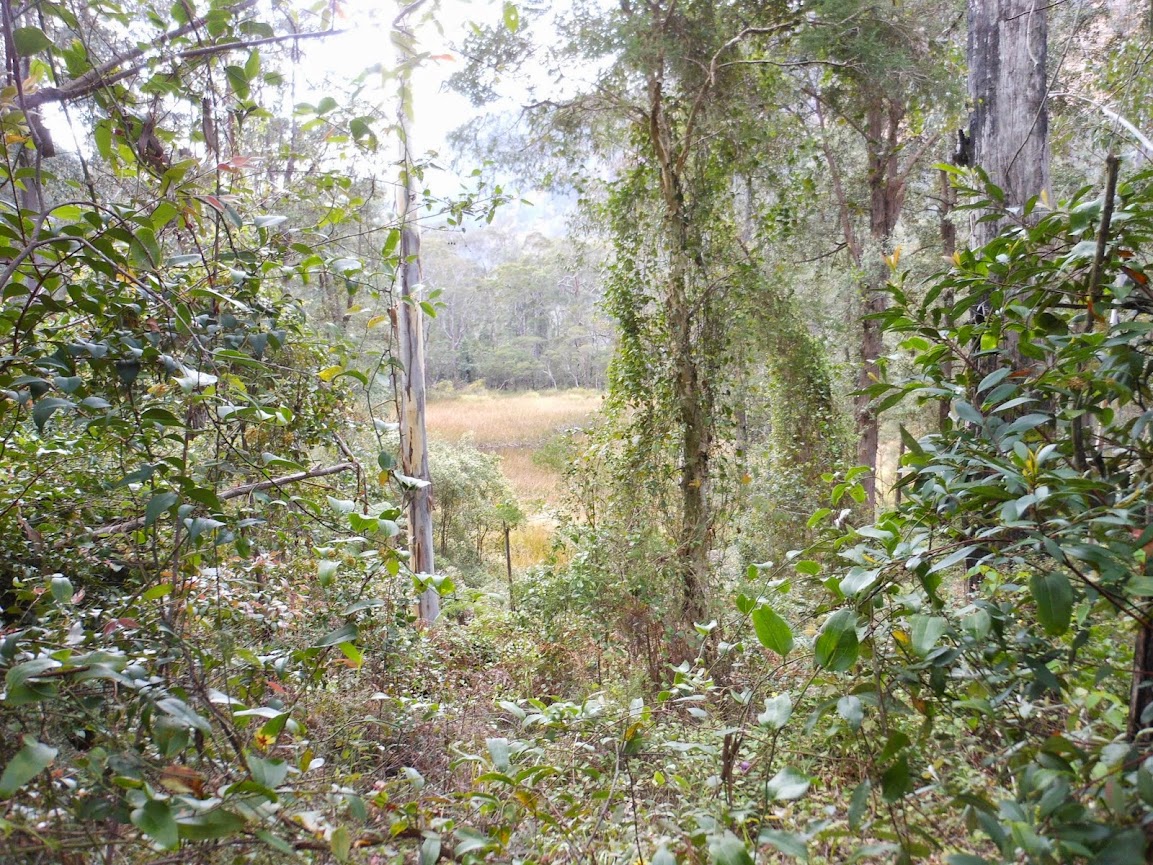 Some of the flora that we came across - orchids & ferns…

The gulch was photogenic, and a lot easier than Zobels - just straightforward boulder hopping, climbing up deep humus, and a few steepish climbs.  There was fresh water in most of the gully - we filled up when it reduced to a trickle. 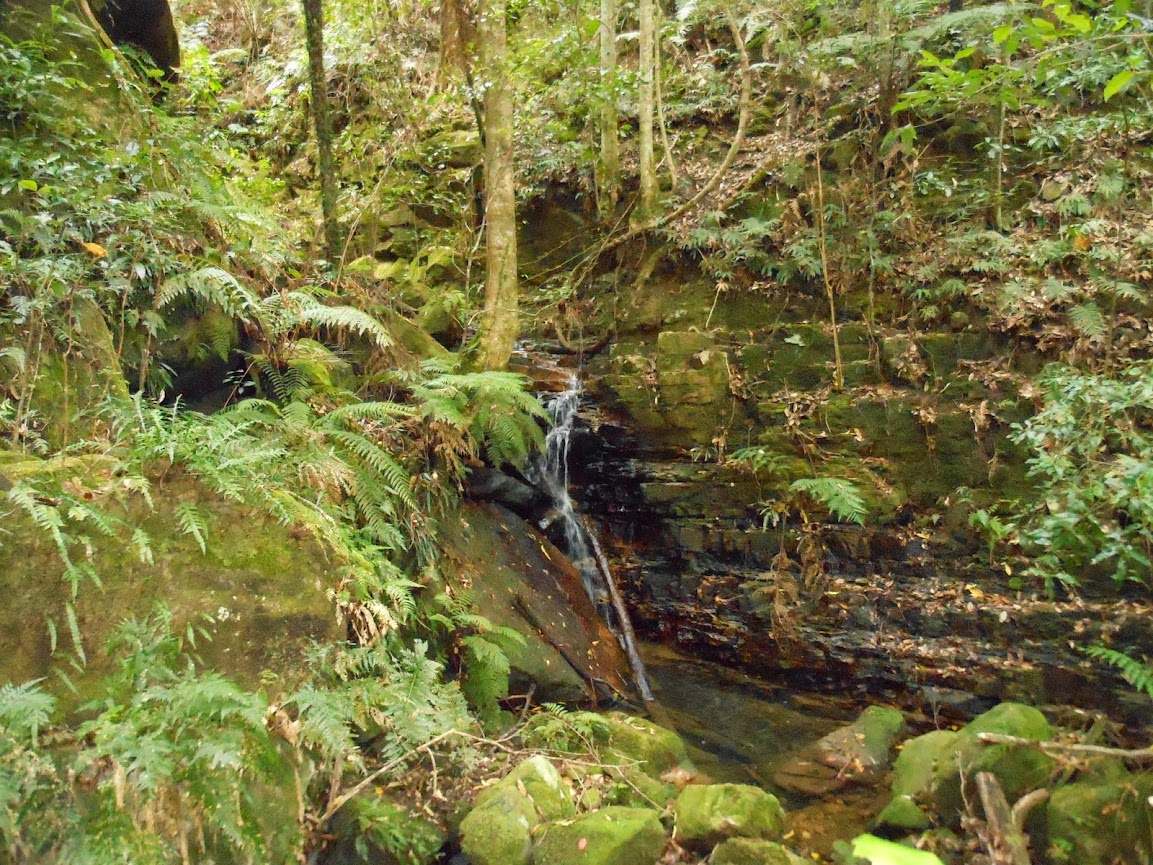 By 1pm we were at the top & ascended Mt Strzlecki to look back down the gulch and across the valley towards Shaws Gully and Byles Pass.  Mt Dixon is on the Left. 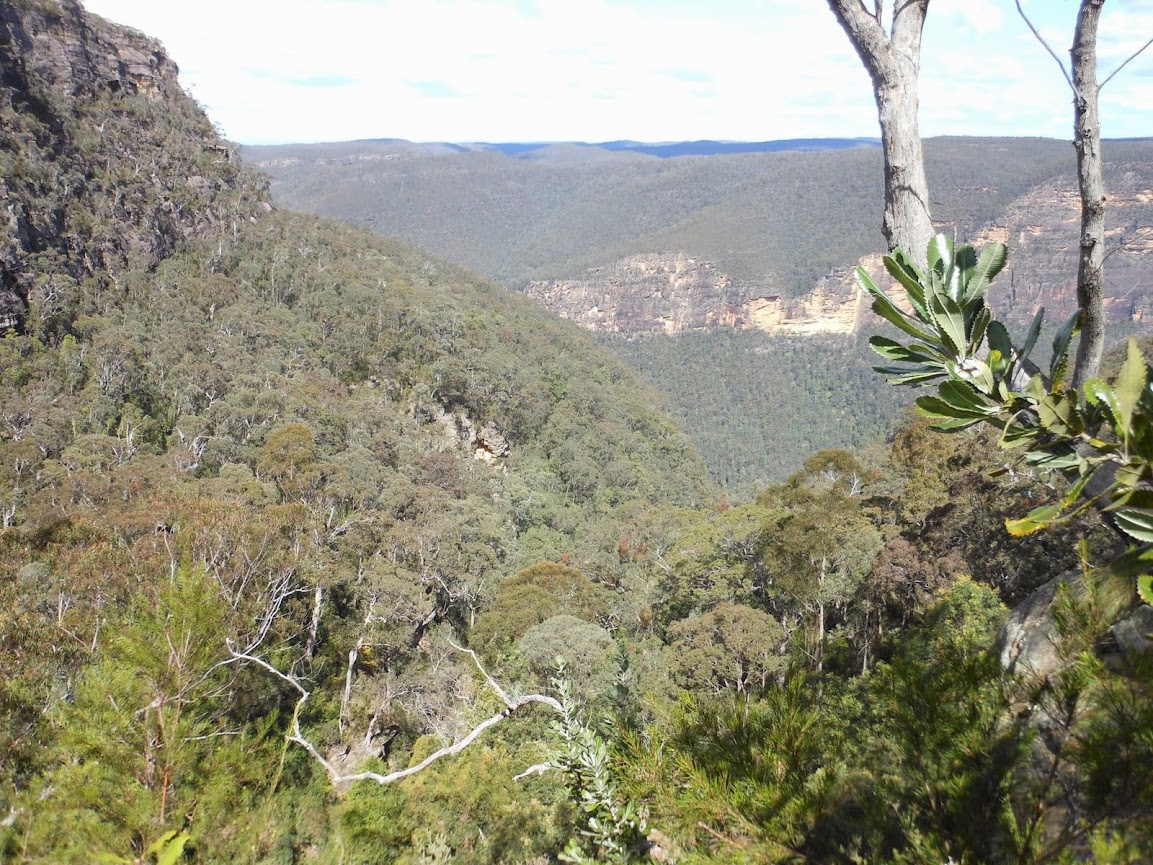 The walk over Mt Strzelecki was easy - scrub wasn’t to bad, and navigation easy enough. We found the knoll leading to Mt Caley. That’s when our troubles began… it’s only about 1km across the top of Mt Caley, however it took us around 3 hours - it’s dense vegetation laced with lawyer vine - mostly head high.  The only highlight was coming across a Diamond Python resting on the lawyer vines. 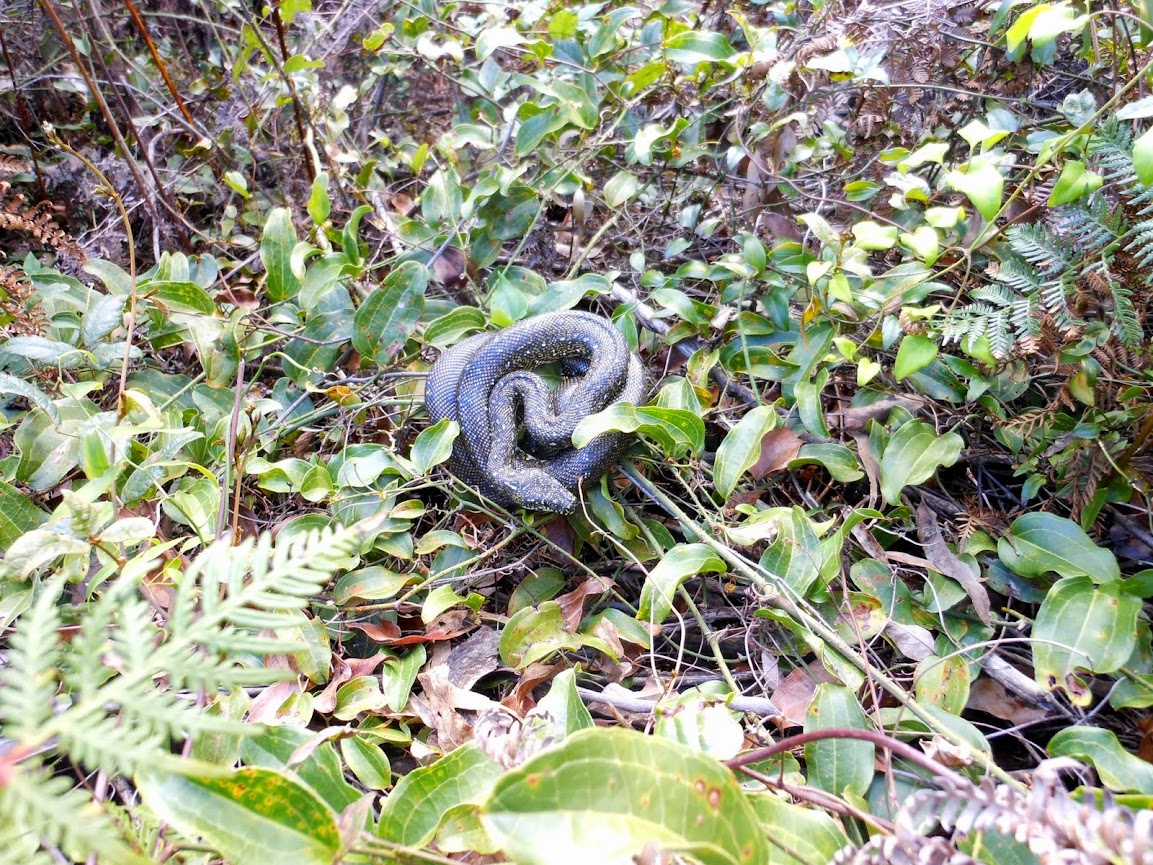 By 5pm we’d got through it all, and found a spectacular vantage point over the Grose. Looking West towards Du Faurs Head and Edgeworth David Head. Explorers Range is seen at the right - that’s the way back along the fire trail. 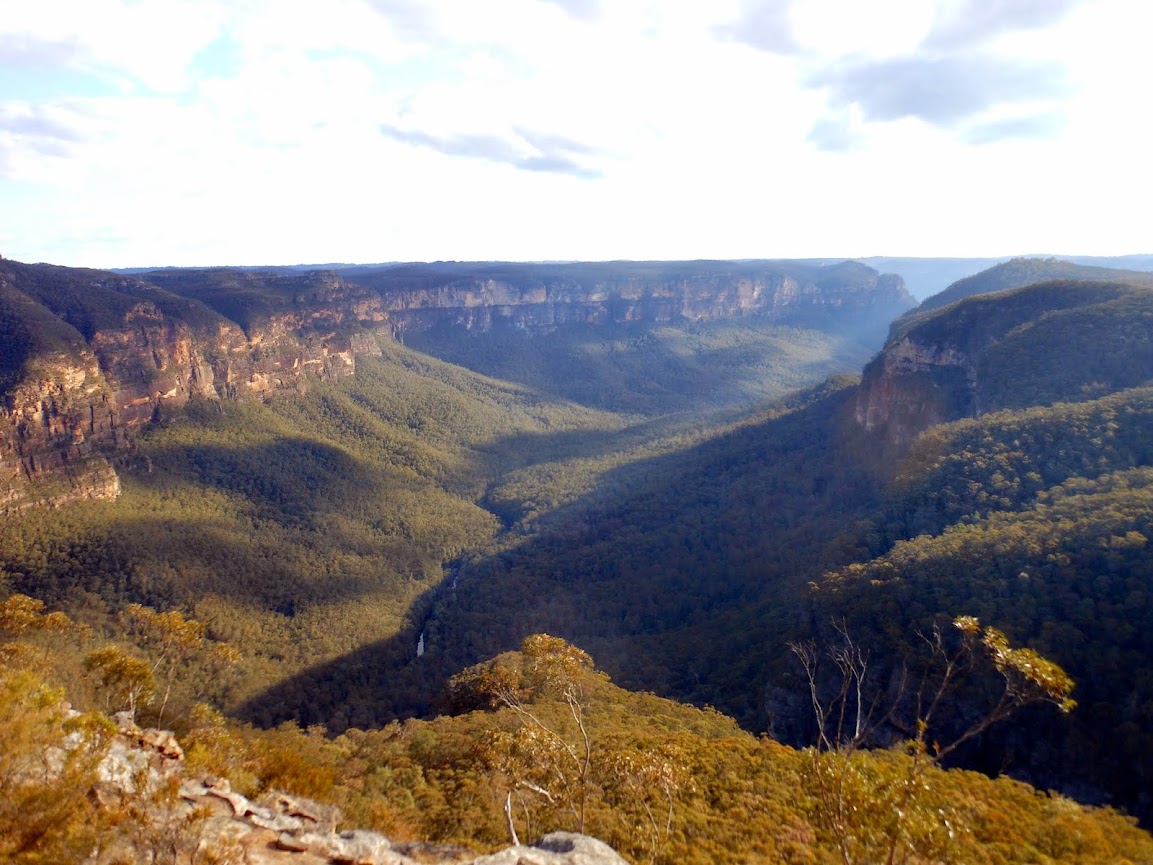 With around an hour till dusk we headed down the hill to the saddle above Zobels Gully…  for one last photo opportunity, again with Mt Caley in the background, 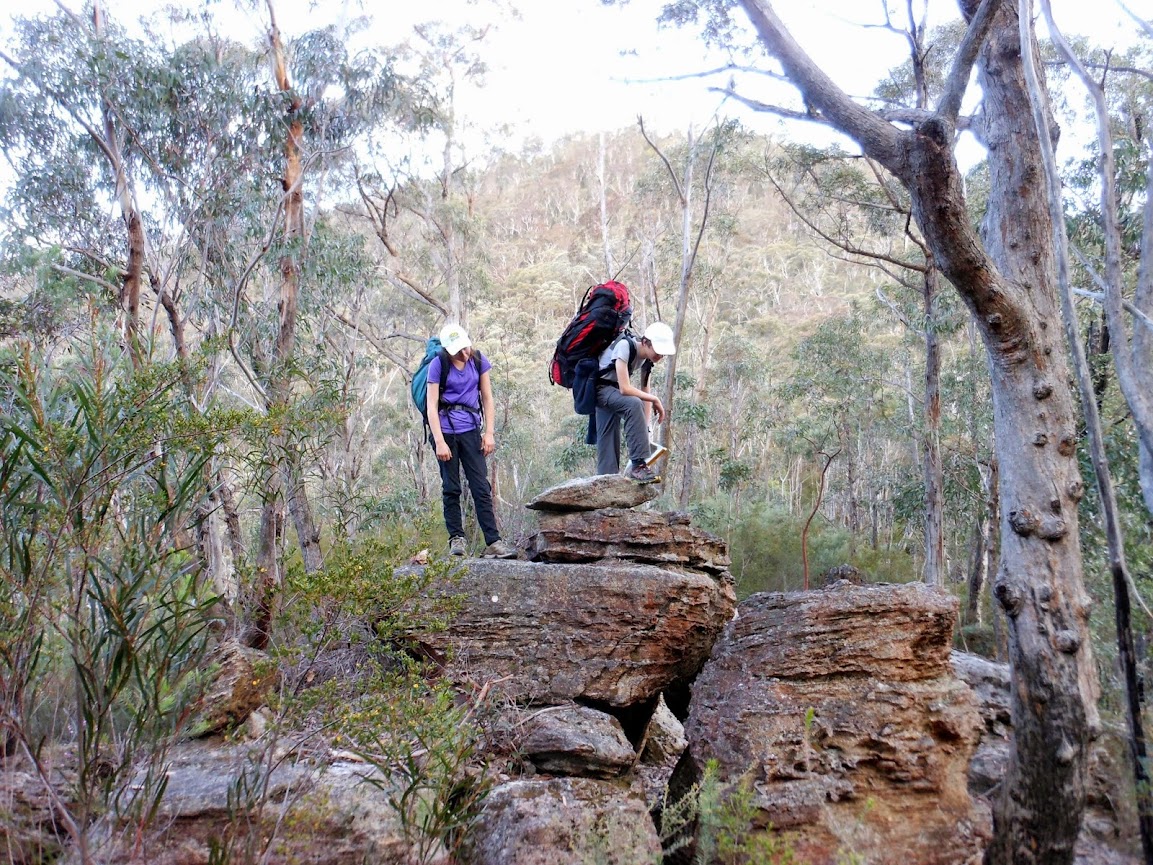 The 10km of fire trail back to the car park took a couple of hours, the last half was in darkness…